Every now and again comes a director so mind-blowingly overrated you almost feel compelled to hate them just to level out the playing field a bit. Even though not all of them are as evil and self obsessed as say, Christopher Nolan (just picking names out a hat here guys), you’ve decided by default that you WILL dislike their over hyped work, and nothing will change your mind. Which is why when this came out i felt a weird sense of curiosity and sympathy.

Although I’ve never been his biggest fan, I do, to a degree, get what hes tried to do. And that’s not because I hate The Sixth Sense (i do hate The Sixth Sense), or because I think all his films are like…the same, or any of that. I just don’t find him particularly effective as a director within the horror genre…as it were.

And none of his films have actually ever scared me in the slightest.

And i fucking hated the village

So I reluctantly watched this, because i was told I WOULD enjoy it by trustworthy sources, and felt i should give him one last stab at winning me over. Go on then Shymalan…do your worst.

Premise of the story is that two teenagers have never met their grandparents due to family estrangement. They go and visit them (I missed this bit completely by the way, because i was in a line buying m&ms), and then some really odd shit starts happening. Becca, the older of the siblings, puts this erratic behavior down to age (they’re old, and old people do odd stuff). The younger one however (Tyler), has his cray-dar firmly fixed since they arrived, and picks up on said red flags pretty quickly.

Now i happened to walk in halfway through a ‘hide and seek’ scene, and noticed that (spoiler alert), the film was being shot entirely from the perspective of Becca, thus making it…

Lets just clarify right now that there is nothing more infuriating then found footage. Literally. nothing.

How can you time your filming so accurately with all the horrific things going on around you? How? How did you even know? Are you that confident within yourself that you don’t mind looking through a lens and possibly getting possessed or killed at the same time? that eager to capture the moment…really? that eager?

‘fine, lets sit through an hour of this, hate it, and then write something really scathing about how he couldn’t get funded and had to pay for it all himself’, I thought.

Surprisingly though, I actually didn’t hate it. 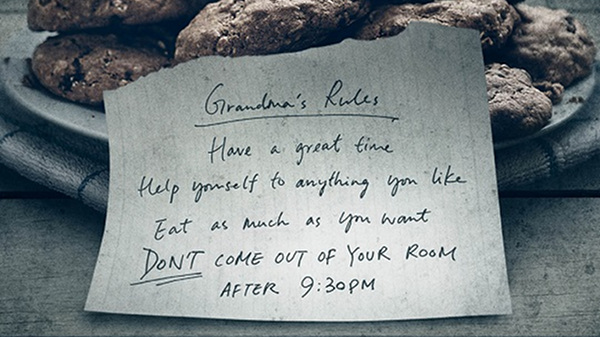 There were moments at the start where it really could’ve gone left with my patience. and i mean really left. Like the grandma’s crazy eyeballing of everything around her, pop pop and his shed full of shit, and that story about going to the costume party (??!). Crazy nan pops up again scratching the walls butt naked and then there’s another story about sundowning, or sungazing, or something…which i’m really glad the kids googled the next day, because i personally wasn’t buying a single word of that crap.

Once you get past the obvious predictability that comes as standard with a found footage film (eyeroll), the end result was really quite great.

It was sharp, it was funny. Tyler was played by an exceptionally talented actor who’s going to get really far in his career, and the ending was phenomenal. Very fun to watch. very sinister (shock horror) and amazingly ticked all the boxes.

Well done Shymalan. you stopped listening to the voices.