I’ve been banging on about this film for weeks because it’s very rare I get REALLY excited about something, and basically force everyone around me to watch it like a woman possessed.

“Have you seen it yet?” I hissed at my colleagues this morning. I could actually SEE their thought process as they politely tried to tell me to fuck off. NO WE HAVEN’T SEEN THAT WEIRD FILM ABOUT SINGLE PEOPLE BEING TURNED INTO ANIMALS BECAUSE WE’RE NOT ALL PSYCHOPATHS LIKE YOU.

Next it will be be that Josef Fritzel film (which no doubt I’ll probably really enjoy), but luckily I haven’t gotten round to that yet so you’ll just have to hear about how groundbreaking i thought this was instead.

The premise, of what is essentially a very simple film, is life in a horrifying modern dystopia, which enforces  traditional values down all their citizens throat in the most bizarre fashion.

Citizens of “The City” are punished by law for failing to be part of a couple. There is a time limit on how long you’re “allowed” to be single, and once you have failed to find a partner on your own, you are then forced to check into a hotel where you have forty five days to find someone. Think very extreme version of “take me out” meets Wuthering Heights. Thats the vibe.

The hotel itself is similar to a care home or even a school, in its regimented, clinical and militant approach to matching up its guests. The process is very mathematical, practical and unbelievably depressing. Should you, the single man or woman, fail to find someone within the forty five day time frame you are turned into an animal of your choice (yes, animal), and sent into the woods to live the rest of your life as the waste of air that society now deems you. No pressure.

The powers that be (in this weird modern world) essentially require you to fulfil your basic human duty to find companionship and live as part of a couple. If you don’t, you basically die being left to fend for yourself. 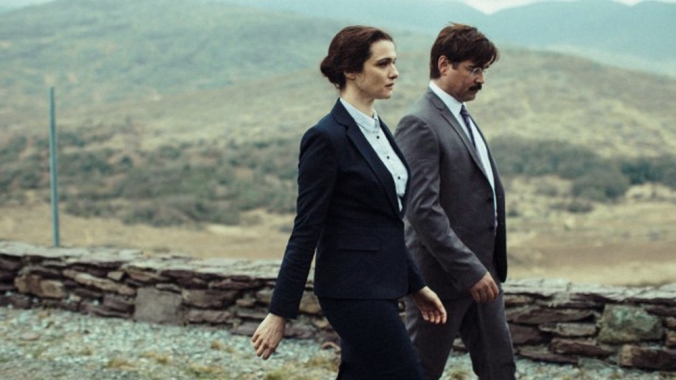 Now, I really enjoyed this, even though hands down… bleak as fuck. Bleak, as i often try and explain, is actually good sometimes; it’s often required to balance out all Netflix originals, Taylor Swift songs and American Idol auditions constantly rammed down our throats. It’s like a much needed reflection of the shit world we live in, that we should never really forget.

ok, so you have to remember that this is a surrealist film… ACTUALLY a surrealist film, not just like a bit of an odd movie. For starters Colin Farel isn’t his usually sexy self; he’s weedy, asexual and a bit pathetic. He sports a creepy paedo tash and awkwardly fumbles everywhere, making him kind of unbearable to watch. The dialogue and interactions between the characters is eerily calm, unnatural and bizarre, and the resounding oddness of the whole situation is given to the viewer in a very “matter of fact” way which makes it all the more bizarre. If this film were an elephant in a room it would be a florescent elephant in a basement flat at 2am.

The setting is familiar, there’s nothing Sci fi or other worldly about the aesthetic whatsoever. In fact the aesthetic is actually very dreary and grey. Nothing futuristic, no flo mo technology, no flying, no hovercrafts.

I won’t ruin it by telling you anything else apart from the fact that it’s probably one of the most chilling films I’ve seen in recent years. There are scenes which made me actually wince, and considering I wrote my uni thesis on The Texas Chainsaw Massacre, it’s pretty hard to make me wince.