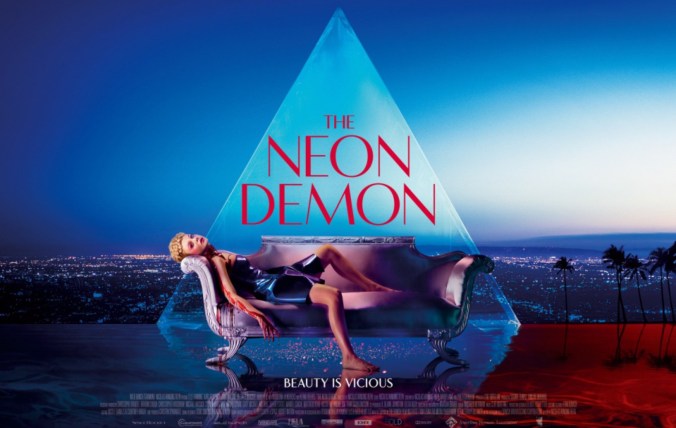 If you were to see this on Netflix, without knowing anything about it, and toyed with the idea of watching it because the visual was cool, and the bloke who did Drive directed it,  then don’t watch it.

I’m not even really sure if Netflix is the right platform for Nicholas Refn. Without sounding like a prentious douchewipe, I see this as more a “Amazon Prime” scenario; the type of film a Kimmy Schmidt viewer may not immediately go to as their first port of call, (unless said Kimmy Schmidt viewer likes cannibalism and necrophila). It doesn’t feel particularly organic, what section would you even put The Neon Demon in? Certainly not “party on!” (Ironically currently featuring Bojack Horseman).

I digress…don’t get me wrong guys, Nat (my flatmate and very close friend) watched it with me, having no prior context whatsoever, and Nat enjoyed it. I was, however, kind enough to point out that there would be lesbian morgue sex about halfway through, and also that pace was not exactly high on Refn’s priority list. Clearly we needed to stablish some fundamentals prior to our sunday night junk food and horror sesh.

In fact we, and possibly a few other humans sporadically dotted around the globe, enjoyed this movie. The dude from the guardian film section seemed to like it (dude from Rolling Stone magazine….didn’t like it so much). Proof, at the risk of stating the mind-blowingly obvious, that not everything is for everyone. 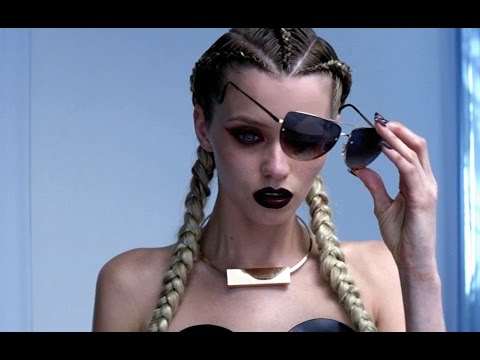 Let me start by explaining that this movie isn’t Drive. A lot of people were passionately pissed off that he didnt make another ‘masterpiece’ like Drive (Drive 2?) and wrote a lot of unsavoury shit about Refn. He famously got booed at Cannes, (often a great PR move), with some even walking out in outrage and shock (think Lars Von Trier circa six years ago). Folks were not happy; apparently appalled and shocked, calling this movie depraved and sickening. So many people got really touchy about the some of the themes, (a far cry from cars, masculinity or crime), that it’s really become a “thing” in relation to the film. So let’s just clarify once and for all that a.Nicholas Refn is allowed to make other types of films that don’t include or involve Ryan Gosling and b. Can we all just get the fuck over Drive. Yes it was incredible, but he’s exploring something else, it’s cool if you don’t like it, let’s move on. 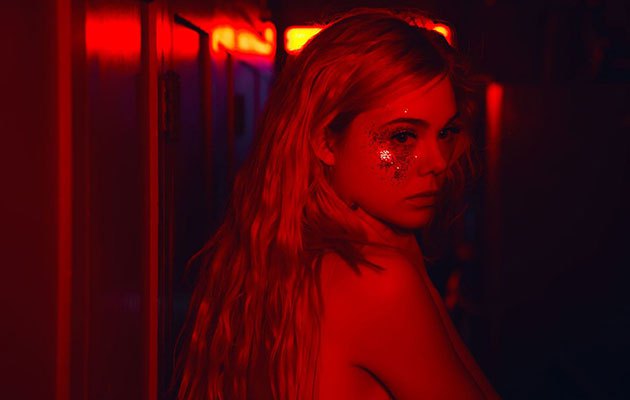 This particular film explores dark topics, in a less than subtle fashion. Excess and materialism marry together beautifully mmm against the isolation backdrop of a dark LA. Everything is visually beautiful, but also feels incredibly detached and in some cases clinical. This notion is further enhanced by the flat conversations between the characters, (its not bad acting, despite Keanu Reeves), the lack of any real emotion in any of the other characters (aside from anger, which is what shapes the end), and the very obvious disposable nature of those within this “world”. If the conversations seem like non starters, its kind of the aim; everyone’s dead on the inside and hates each other.

The premise is a beautiful child (that’s what I’m calling her, because she’s 16), enters the world of modelling and discovers pretty quickly that you can’t trust anyone. Problem is, this young beautiful ethereal girl (played by the very cute Elle Fanning), becomes increasingly more narcissistic and selfish the more she is sucked into “the neon demon” (a metaphor for the bright shiny lights of the hollywood machine). Her mannerisms subtly change, she grows increasingly more self aware…and kind of turns into a dick. Another casualty of LA.
On the sidelines are groups of grown ups out to get her in various ways. Each with their own set of vile intentions; be it lust, jealousy or power, that culminate in an actual blood bath…

So i’m sure you’ree all dying to know about the necrophilia scene (no pun intended)…well, i never thought i would say this, but there is actually a worse scene in this film. That scene ladies and gents, involves Keanu Reeves in a shellsuit forcing a knife down Jessie’s throat. This alone was so stomache churning and dark that it made me question whether i wanted to see what was on its way, which I’m sure was the whole point. This scene also marks a change of pace, because up until this point it’s all been pretty visuals and awkward conversations.

I won’t pretend that this film isn’t self aware, or a little slow. It’s both. If you want to watch a “horror” movie with haunted houses and chainsaws, this might not be your bag. Yes he does borrow a lot; everything from Italian horror, to Kubrick to Lynch. Yes it’s very stylised and very visual. Is it shit? No. It isn’t.

One thought on “The darkest shade of neon ”